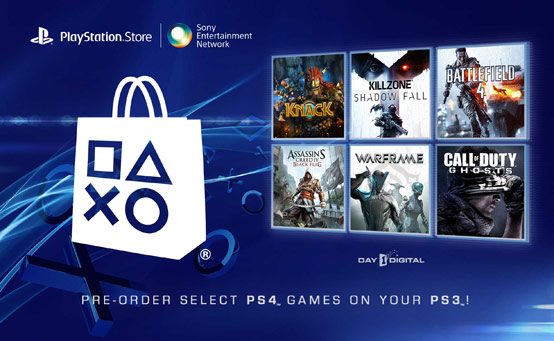 If you pre-order these titles today, you’ll have them when they launch for PS4. As an added bonus, all four games feature exclusive pre-order bonuses.

If you’ve already pre-ordered or purchased the PS3 version of Call of Duty: Ghosts, Assassin’s Creed IV Black Flag, or Battlefield 4, you can upgrade to the PS4 digital version at the discounted price of $9.99 for a limited time. Get all the details on how to take full advantage of this program here.

Also, if you purchase a season pass for the PS3 version of Call of Duty: Ghosts, Assassin’s Creed IV Black Flag, or Battlefield 4, you’ll be able to download the PS4 version for free. You’ll need to purchase the season passes for the PS3 versions of Call of Duty: Ghosts and Assassin’s Creed IV by May 31st, 2014, in order to take advantage of this deal.

Which PS4 games are you going to pre-order? Let us know in the comments below.